The findings with ketamine indicate that it is possible to develop novel, rapid-acting antidepressants that alleviate symptoms and their underlying pathophysiology within minutes, rather than weeks or months. The laboratory routinely utilizes a number of experimental approaches in order to evaluate the efficacy of therapeutic agents used in the treatment of mood disorders. Some of these include behavioral assays commonly used in preclinical research, as well as electroencephalography (EEG), biochemical, electrophysiological studies in collaboration with other groups. Additionally, we are involved in a number of collaborative translational studies with clinically focused research groups. 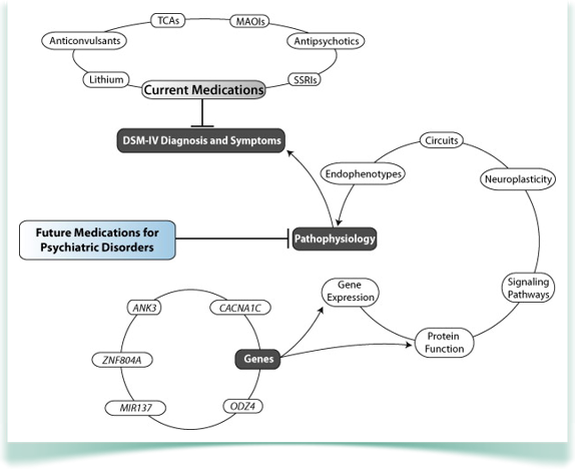 The high heritability of bipolar disorder and depression, estimated to be up to 90 and 50 percent respectively, indicates that genetic variation in particular genes predisposes to the development of these illnesses and that identification of the functional relevance of such genetic variation is likely to provide valuable insights that will ultimately lead to new treatments. One such genetic finding in humans is an association between polymorphisms in CACNA1C, a gene that codes for the α1 subunit of the CaV1.2 L-type calcium channel, and a diagnosis of bipolar disorder or depression. We are assessing the impact of CaV1.2 on behavior and other brain functions in the mouse within a context relevant to mood disorder pathophysiology. We are additionally conducting molecular genetic studies using human postmortem brain tissue.

​Molecular and behavioral effects of lithium 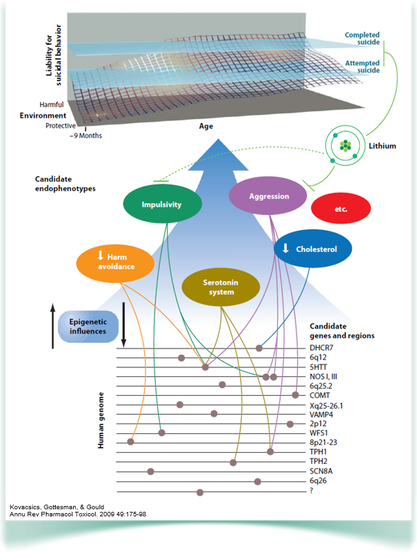 Extensive clinical evidence for the use of lithium as a mood stabilizer, with antimanic, antidepressant, and antisuicidal actions has accumulated over many decades. However, the mechanisms underlying these beneficial effects of lithium are unknown, limiting the potential to identify novel targets that may result in improved therapeutic approaches. We dissect lithium-sensitive behaviors in the mouse as a means to identify the molecular and genetic underpinnings of lithium response. Knowledge derived from these studies may ultimately lead to further optimization of treatment for patients who suffer from mood disorders.

Candidate gene regions, genes, and endophenotypes implicated in a biological systems approach to suicide research. The top portion depicts the dynamic interplay among genetic, environmental, and epigenetic factors that produce cumulative liability to demonstrating thoughts and behaviors related to suicide. Lithium therapy is associated with a decreased risk of suicide attempts and completed suicide, which may be due in part to moderating effects of the drug on aggression and impulsivity.

Gonadal hormones, especially estradiol, are suspected to play a role in mood and anxiety disorder pathophysiology. We aim to understand the interactions between underlying genetic susceptibility and gonadal hormones that lead to genetically medicated sex differences. Related projects seek to better understand the therapeutic roles of estradiol in females as well as males.